The American Tree Farm System (AFTS) assesses tree farms to make sure members are working to the high standards of sustainable harvests and regenerative forestry. As president of the Virginia Tree Farm Foundation, I got to go along. 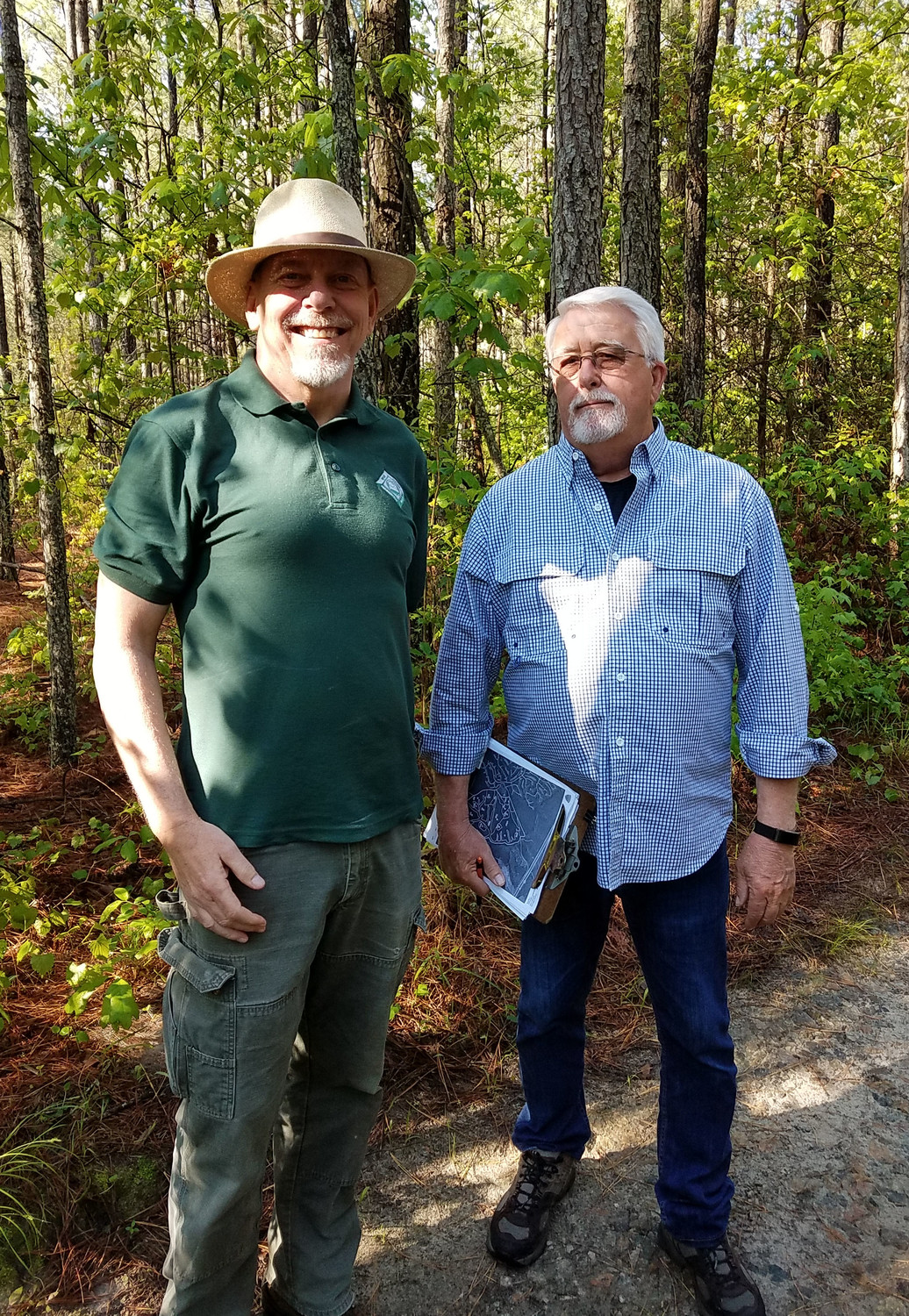 We finished our tree farm assessment trip on May 11. I am confident that Virginia passed. We have over 1000 certified tree farms in Virginia and this year Virginia is representing the southern states, so if we pass they pass too. We did a representative sample of twenty-one farms in various size classes in various places around the commonwealth. I drove a total 1,195 miles, lots of it over dusty dirt roads. But it was fun to see so much of Virginia and meet such great people.

All tree farmers harvest timber sustainably and follow the principles of regenerative forestry. We protect the water and soil on our land. Beyond that, there are varieties of goals. All the tree farmers I met wanted to make their land profitable, since otherwise few can afford to hold the land, but none were interested only in profit. Some examples are below.

One of the tree farmers we visited has as his central goal to create habitat for bobwhite quail, and he has succeeded. He burns under the pines, plants the right sorts of warm season grasses and provides cover. He doesn’t hunt the birds himself. He just likes to see and hear them.

For another tree farmer, the primary goal is to restore mature hardwood stands like yellow poplar and oak. He wants to recreate the kind of Virginia environment of centuries ago. Of course, this is not 100% possible. Unfortunately, some important trees such as American chestnuts and now ash trees no longer thrive here. But with care we can produce a good and diverse ecosystem. This will take 80 years or more, so it is a generational activity.

I met a guy whose farm had been in his family since the 1640s and another who bought his only a few years ago as a place to retire. We inspected a tree farm of more than 1800 acres, with stands of various ages interspersed with wildlife plots. We also saw one that was only twenty acres. The owner was mostly interested in having a place to sit near a stream.

Most conservation will be, must be done on private lands. When private landowners are engaged and informed they form a constituency for conservation. Beyond that, they contribute local knowledge and their own intelligence and imagination to make things better. In a complex adaptive environment – and that is nature – having lots of options and ideas is the best way to go. Tree Farm helps make this happen.

My picture shows the assessor, Jim Rochelle, and me. He is a great guy, trained as a wildlife biologist and experienced in forestry.

Below are some notes from the each day. 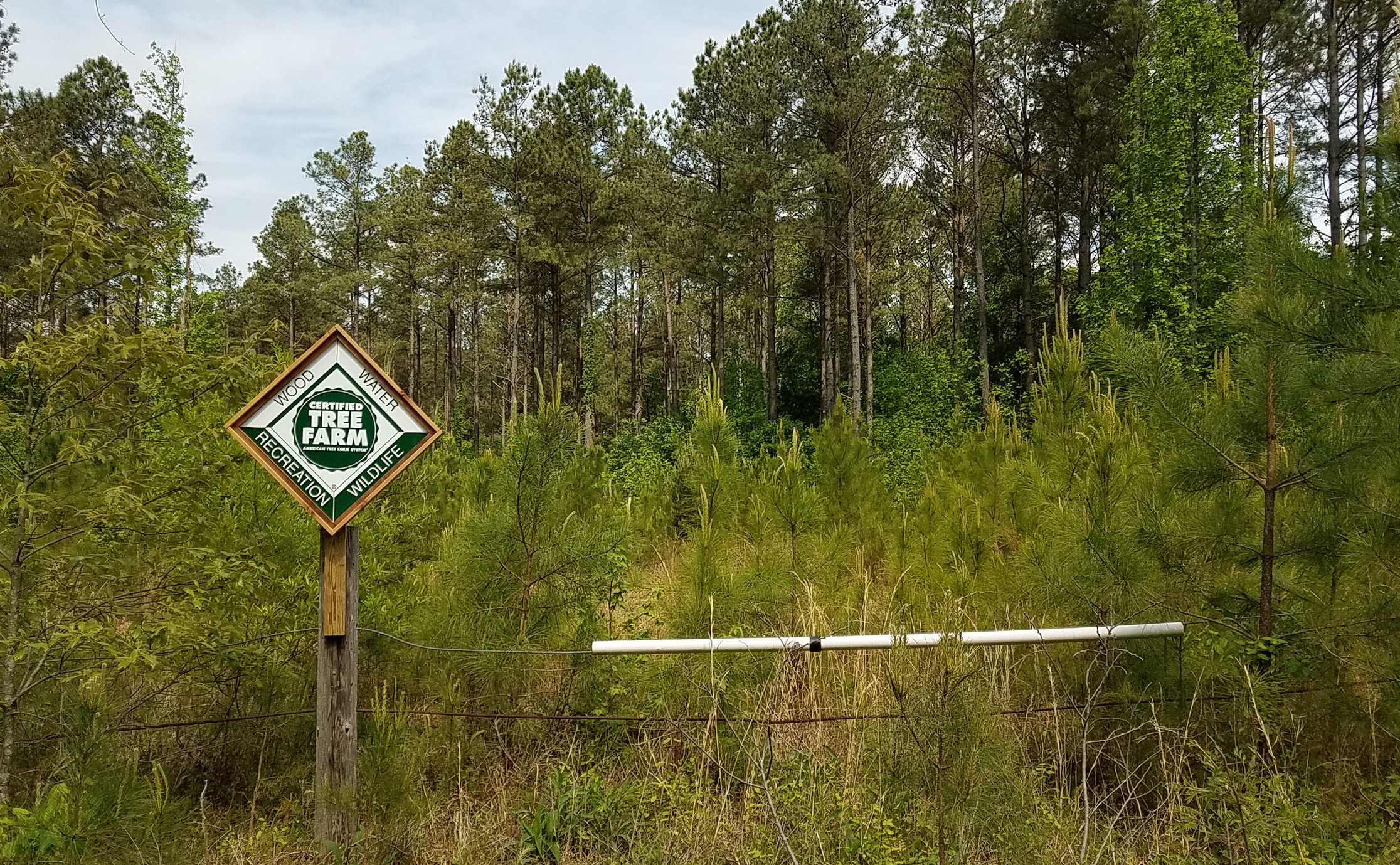 We have successfully finished twenty out of the twenty-one tree farm assessments. I am confident that Virginia will not only pass but excel. 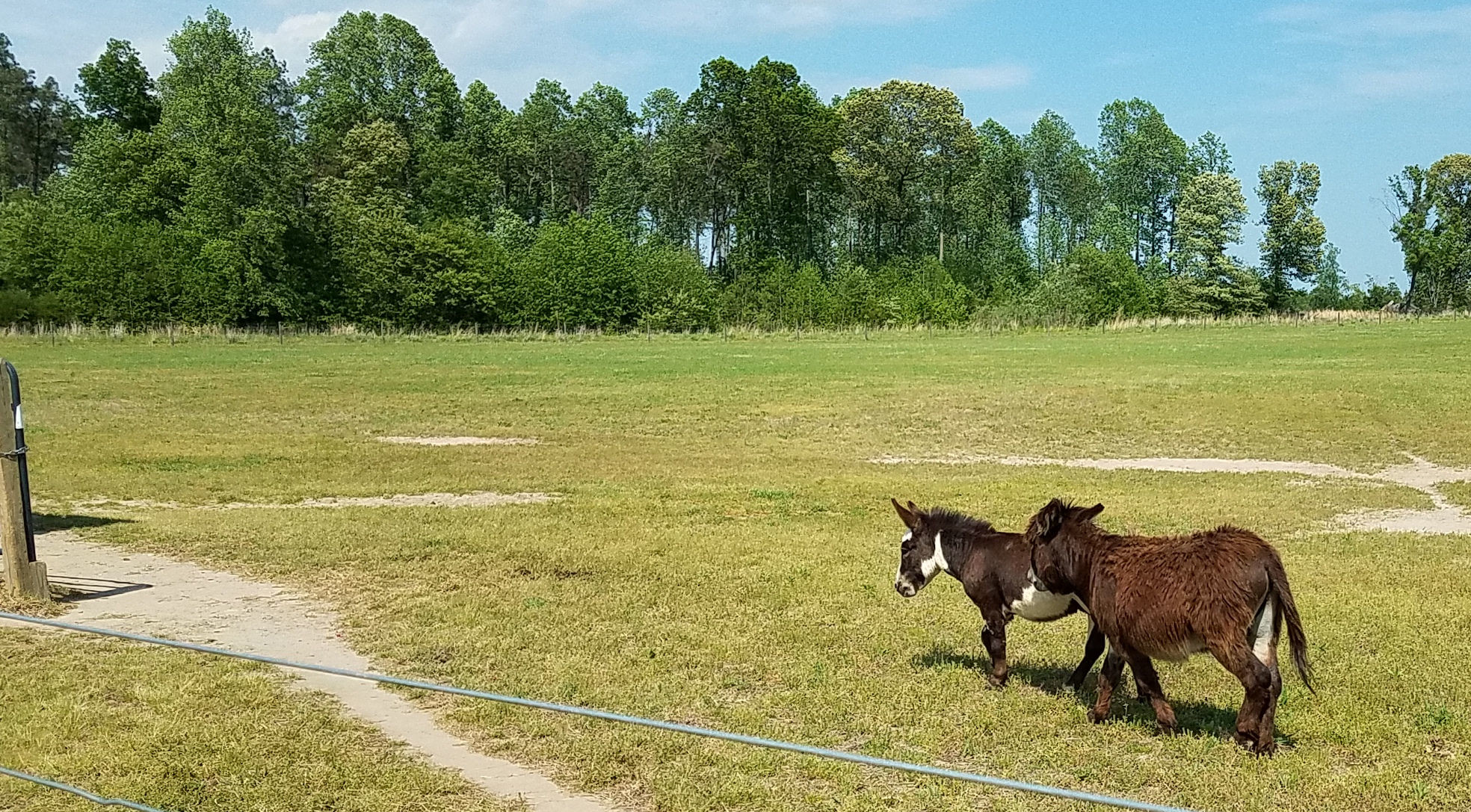 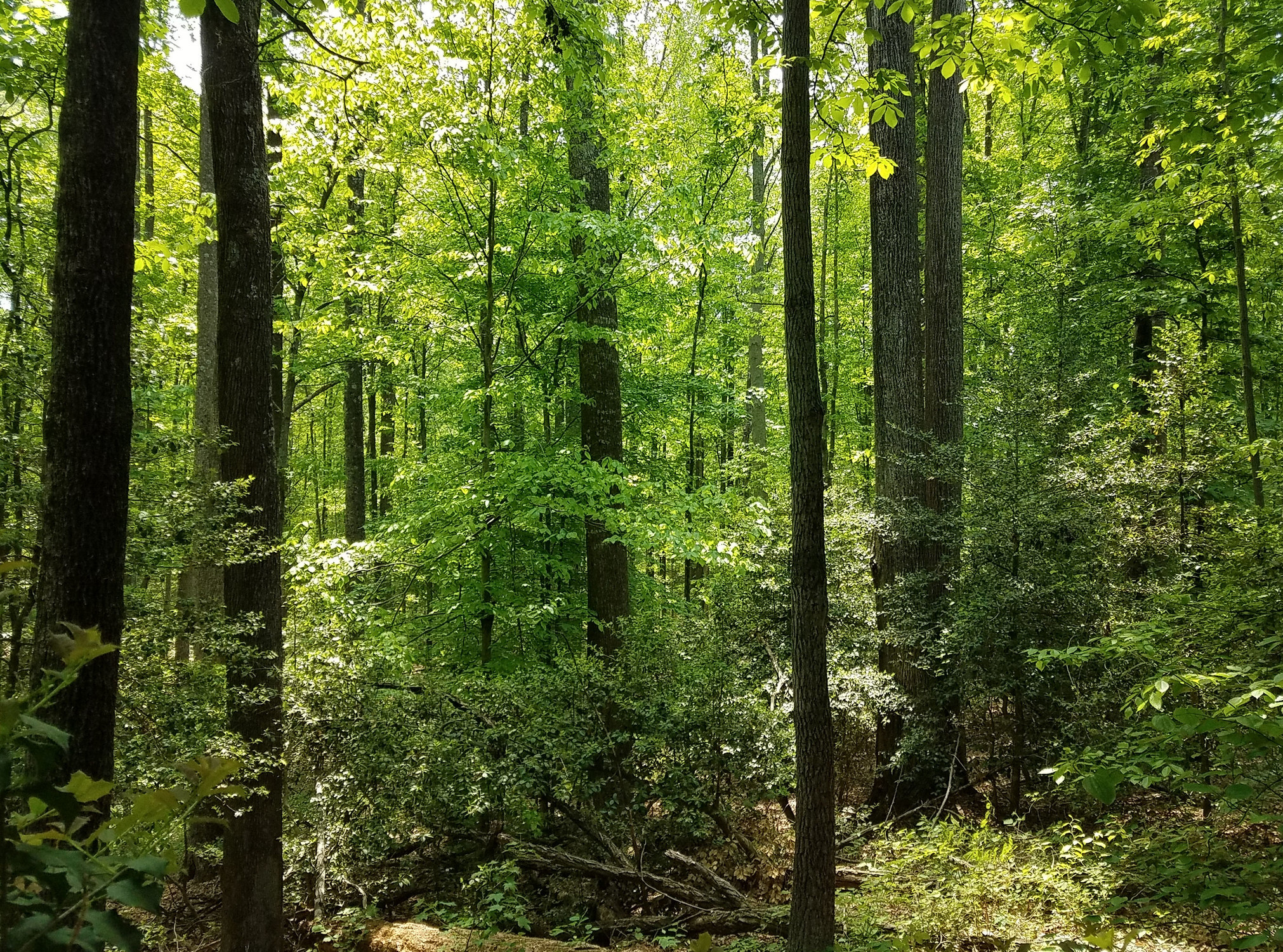 It has been great to be part of this assessment. Tree farmers in Virginia are contributing mightily to conservation on private land and I got to see it up close. 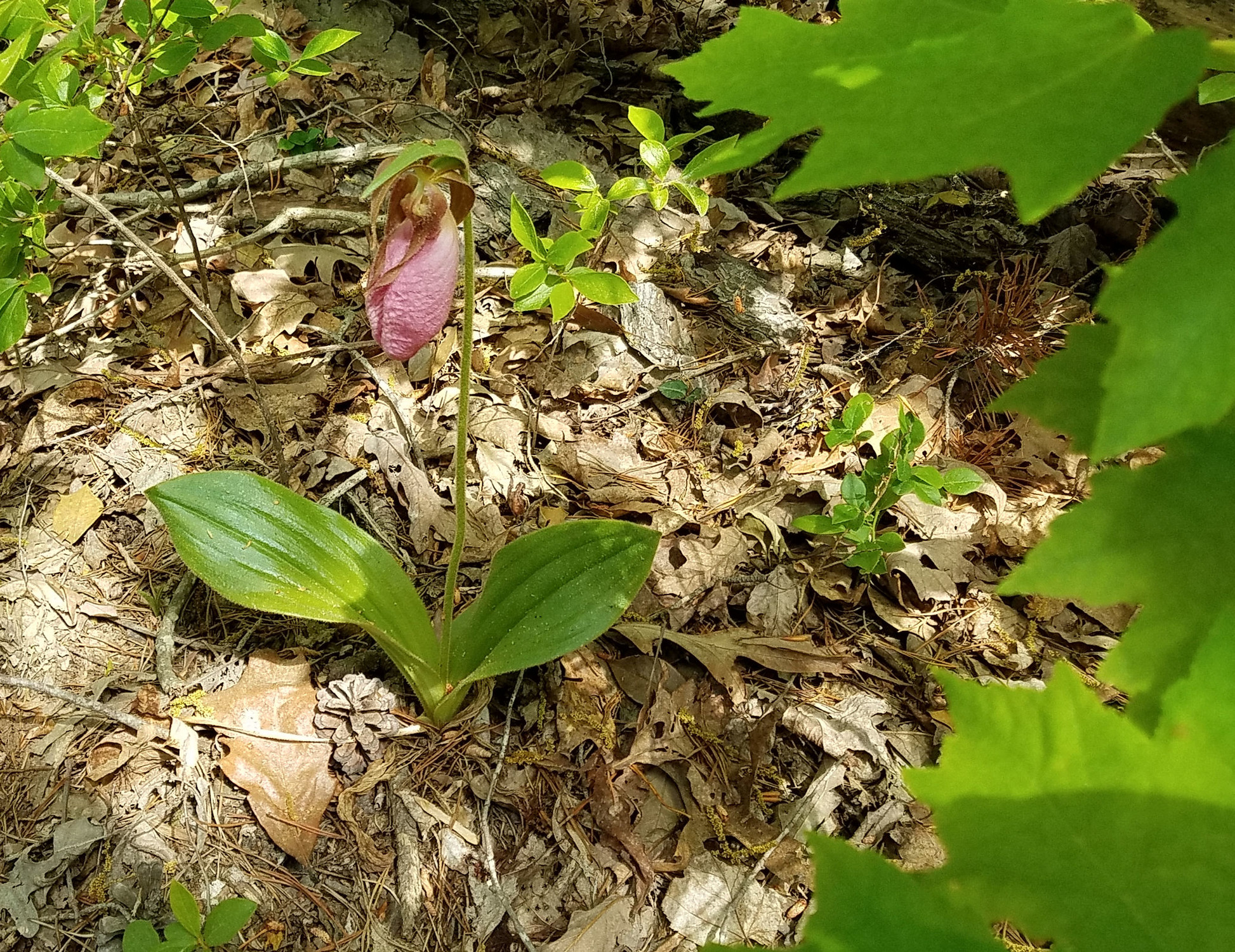 My first picture shows loblolly planted in 1987 with their volunteer progeny in front. It is a challenge not to get too many loblollies on a site. We plant the genetically better trees only to get them crowded out. I have a plan for mine, however. We planted loblolly 10×10 in Brodnax and now they are surrounded by volunteers. I figure that the ones we planted will grow faster because they are genetically better, and they have a year head start. If I burn when they are eight-years-old, if it is not too hot, the fire will thin the stand by killing the little ones, which will be mostly the volunteers. Might work.

The next picture shows yellow poplars. Hardwood forests are usually managed with natural regeneration. Yellow poplar seeds spread by the winds and can carry far. They need significant sunlight, so you need to clear some acreage. Selective cutting sounds like a good idea but usually is not good in practice. If you just take out the biggest trees, you are condemning your forest to weakness. The biggest trees are not always the oldest. Dishonest loggers will take out the best, called “high-grading” leaving those that will never get very big. And many desirable species like oak and yellow poplar will not grow in the shade.

Picture #3 is a lady slipper, a type of orchid native to North America. Next are a couple of jackasses. One of our tree farmers has lots of horses and donkeys. 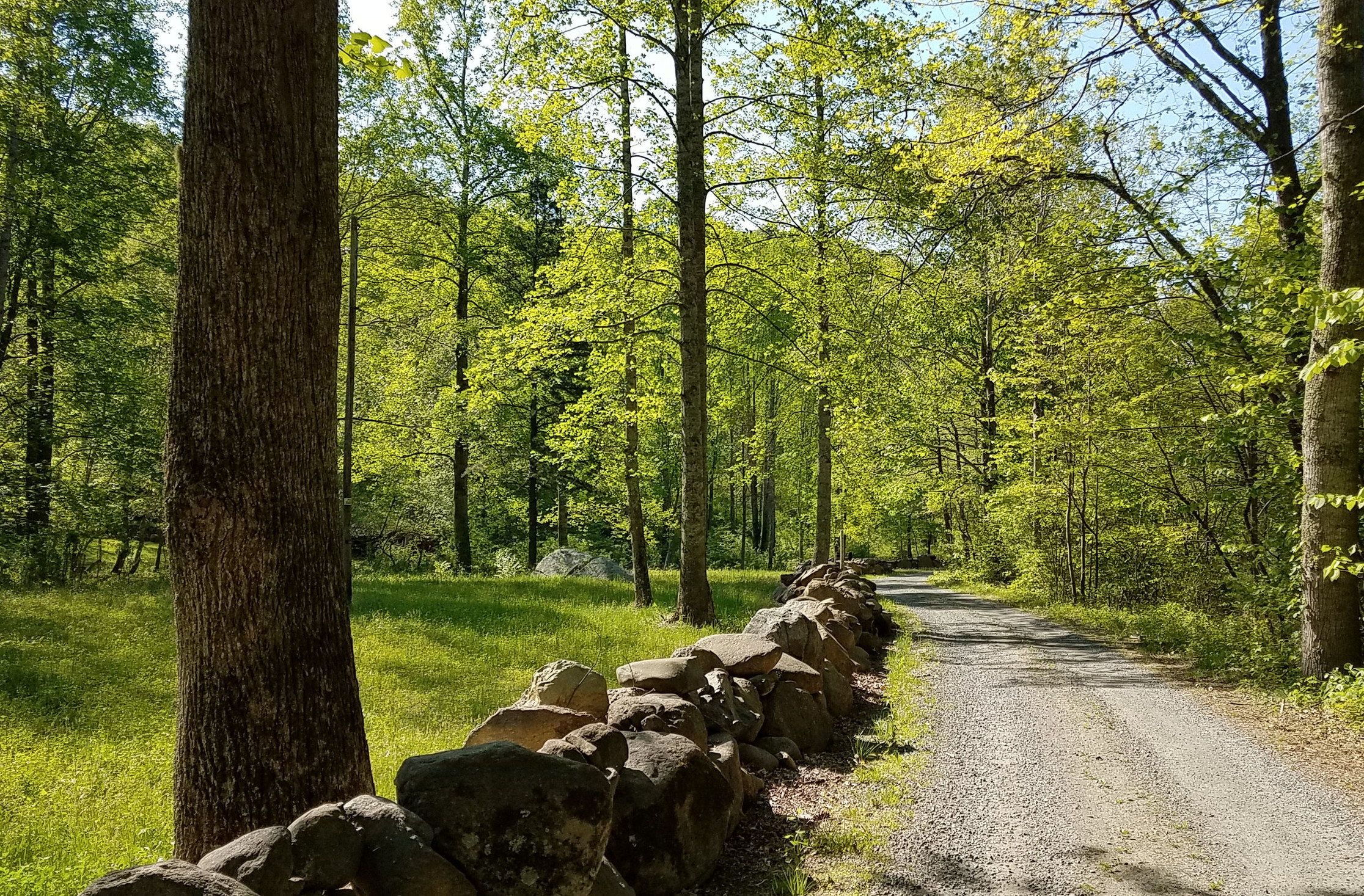 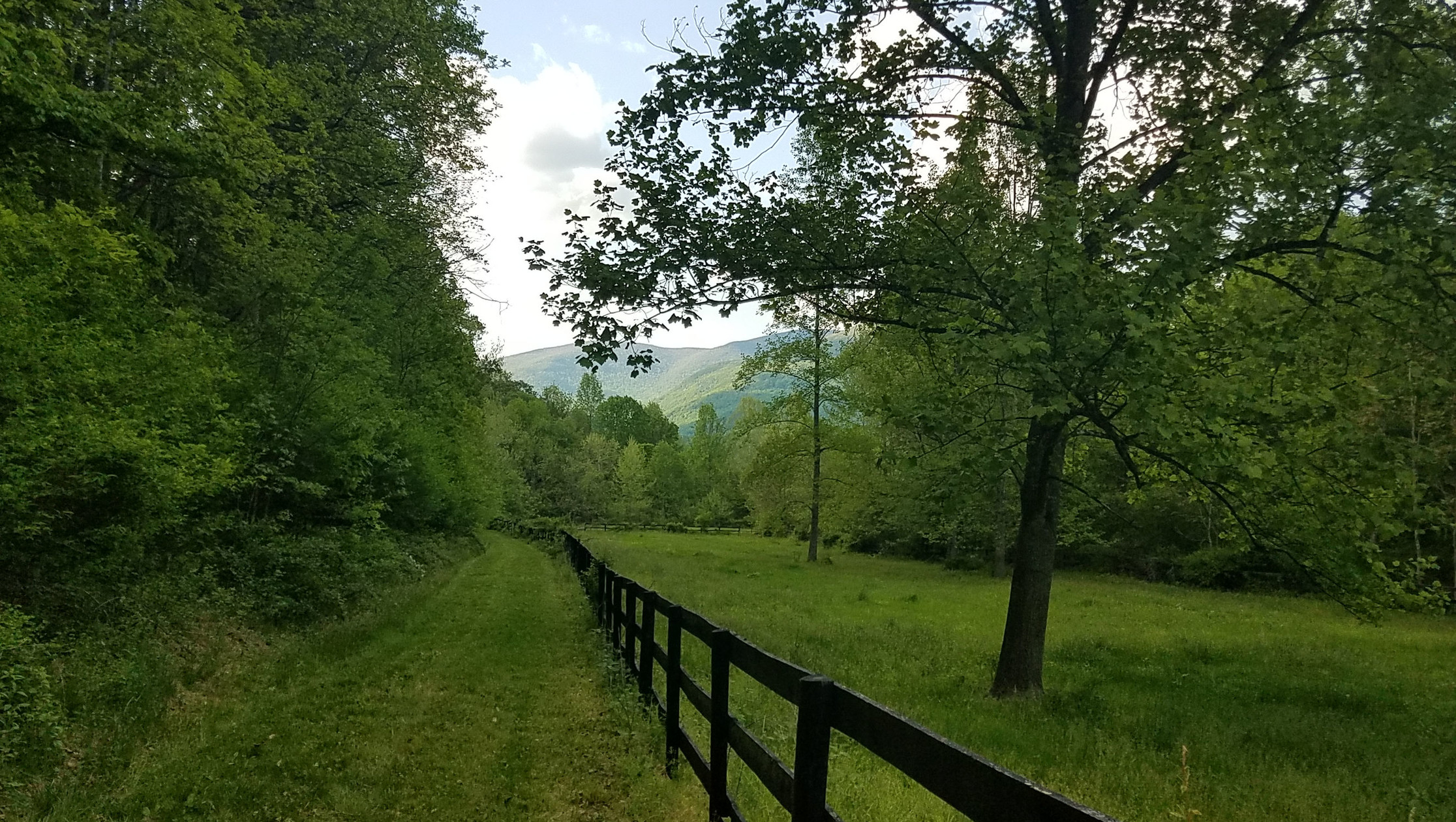 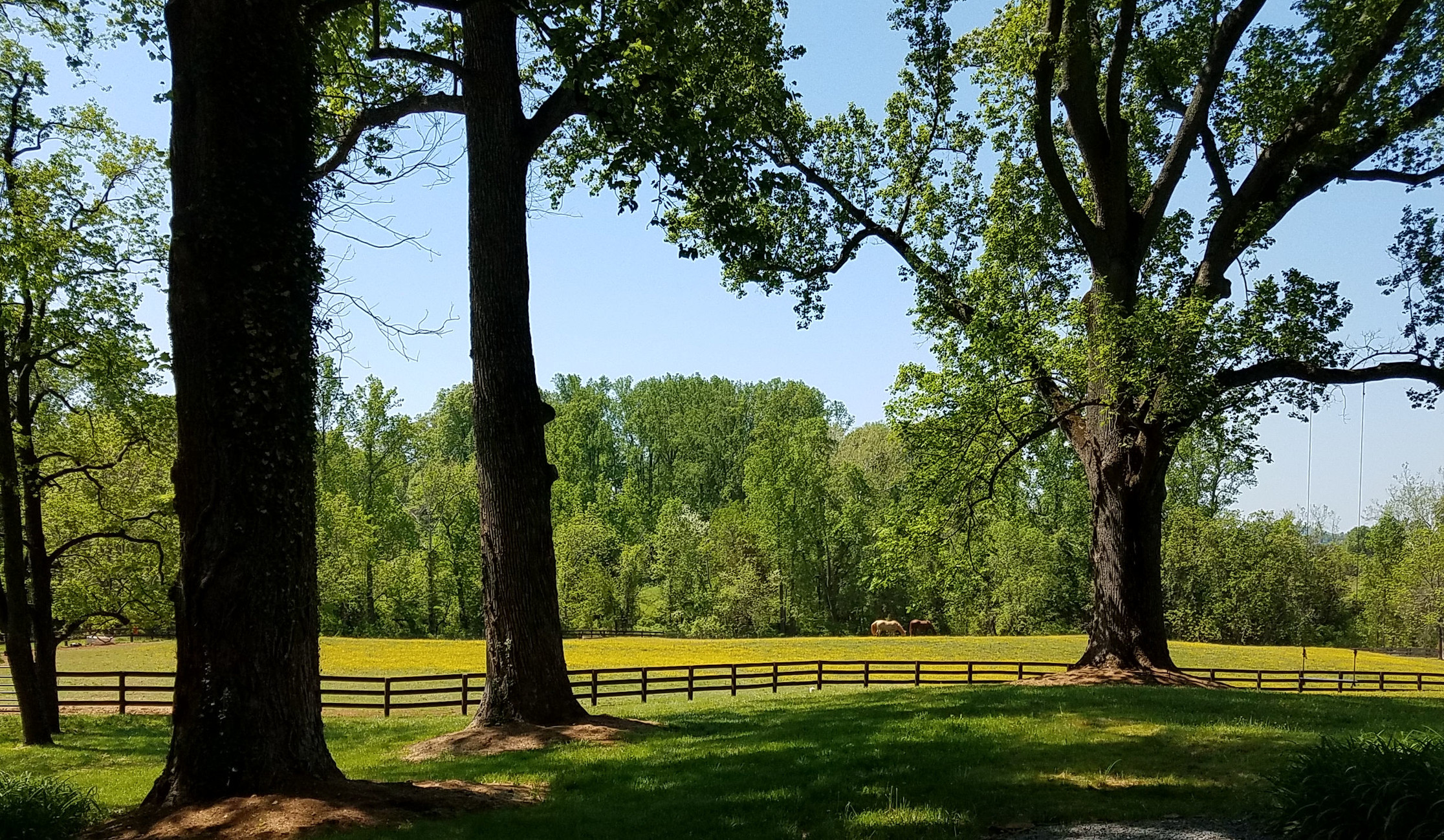 We spent the third day of tree farm assessments around Thomas Jefferson country. This is one of the prettiest parts of Virginia & Jefferson is one of my favorite America leaders. But Jefferson country makes me think of someone much closer. Mariza Matel graduated from Thomas Jefferson’s university. Driving around here brings thoughts of her. We came up here often to drop her off or pick her up at UVA. 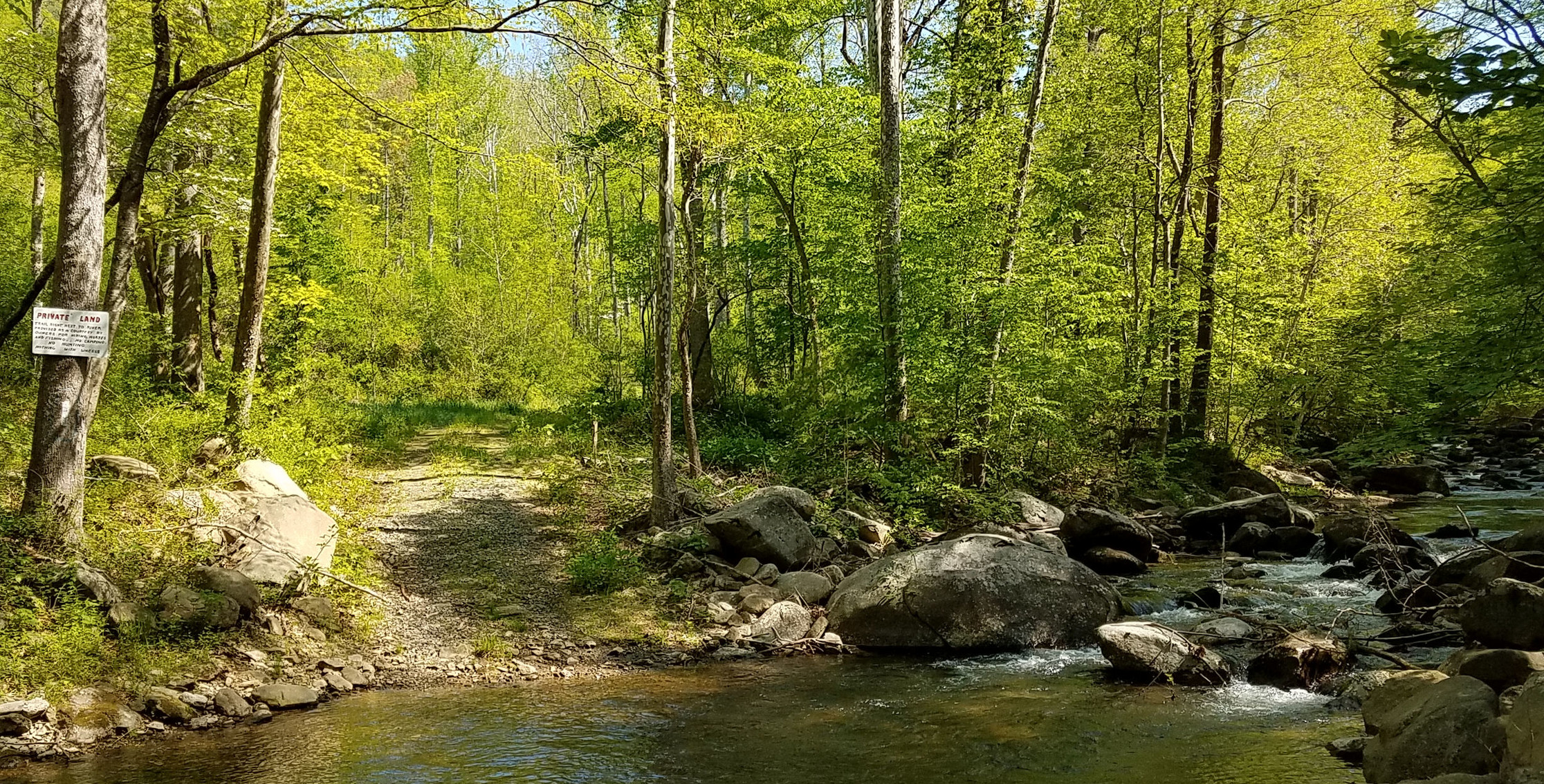 Jefferson (& Madison & Monroe) country is a countryside of very neat, often historical farms, now being joined by vineyards, cider makers and specialty beef and pork producers. Roads are flanked by well-maintained fences of wood or bricks. Fences made from big rocks, as you see in my picture below are not common, but I thought it good to take the picture of something so attractive. They are hard to see in the second picture, but if you look closely you see a couple of horses. In the foreground are some very big yellow poplars (tulip trees). Picture #3 shows a public path on private land. Last is a nice morning scene.

All the pictures are taken from Virginia certified tree farms. Tree farmers conserve a lot of beauty. 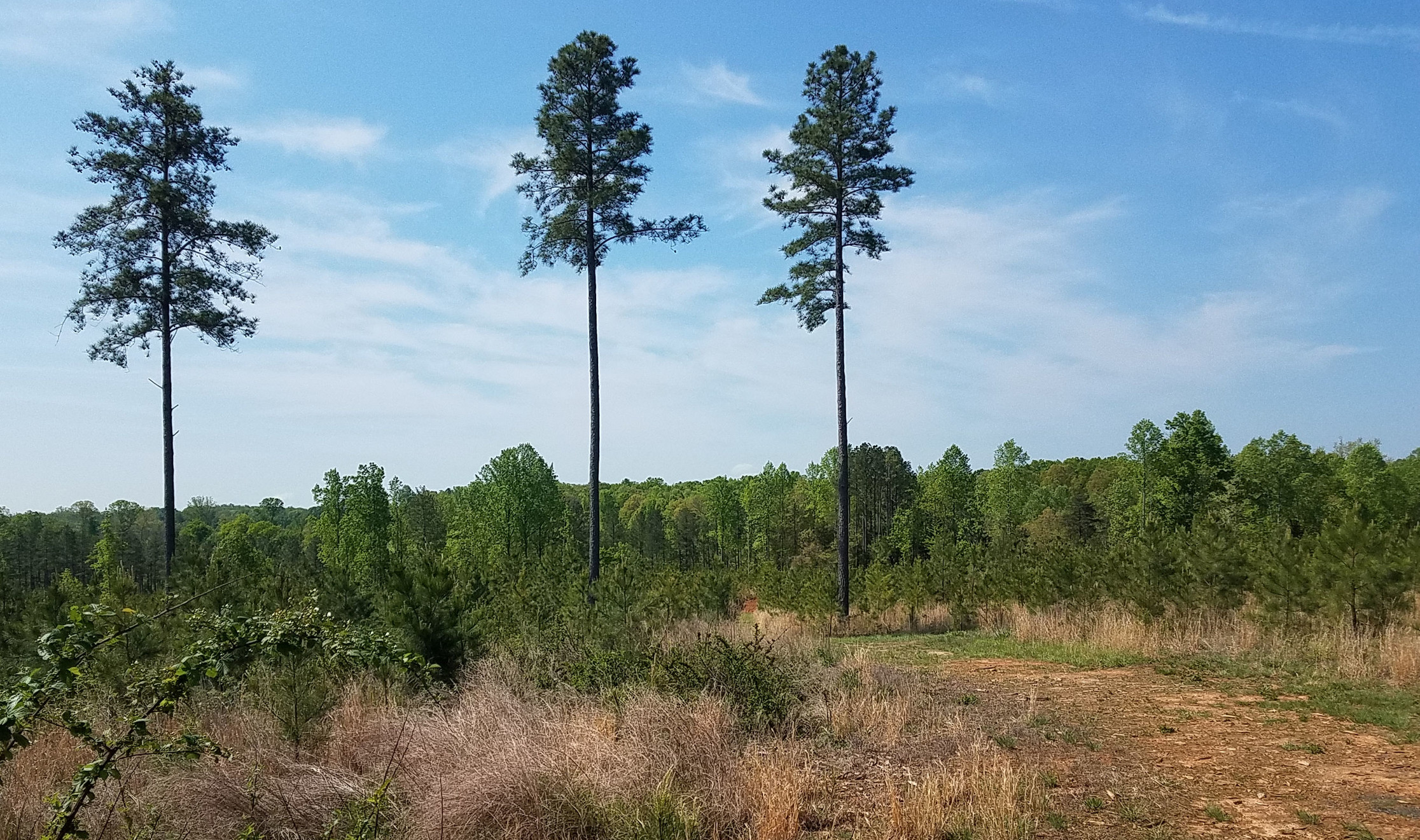 Virginia accents are diverse and beautiful. They are not generally like the stereotypical southern accents you hear on TV, often done by non-southern actors. Rather, there is a polite, melodious softness.

A great thing about talking to forestry folks is that they often have a species of Virginia accent with a college education, as many has graduated from Virginia Tech or North Carolina State.

I think it a little ironic that when Washington, Jefferson or Madison are depicted on TV or in movies, they usually have a kind of British accent. More likely these Virginians spoke like Virginians.

This is the Day #2 of our Virginia forestry Odyssey. Of tree farmers are acquitting themselves well. They have up-to-date management plans and we find there land ethics etched on the land itself. It is gratifying to me and I am proud of my small role in Virginia tree farming.

We are very lucky to have such great cooperation with Virginia Department of Forestry. Tree Farm could not do its work w/o these friends. We help each other.

Certification is important. Tree farmers still do not see the benefits in the form of higher prices for their forest products, but in the longer run certification is part of our broader social license to operate. It is a public affirmation of our commitment to regenerative forestry, making clean water and living soils a forest product.

The Commonwealth has three big eco-regions and lots of smaller ones. The big ones are the flat tidewater, which turns to Piedmont roughly at I-95. Piedmont transitions to mountains more or less along US 29. 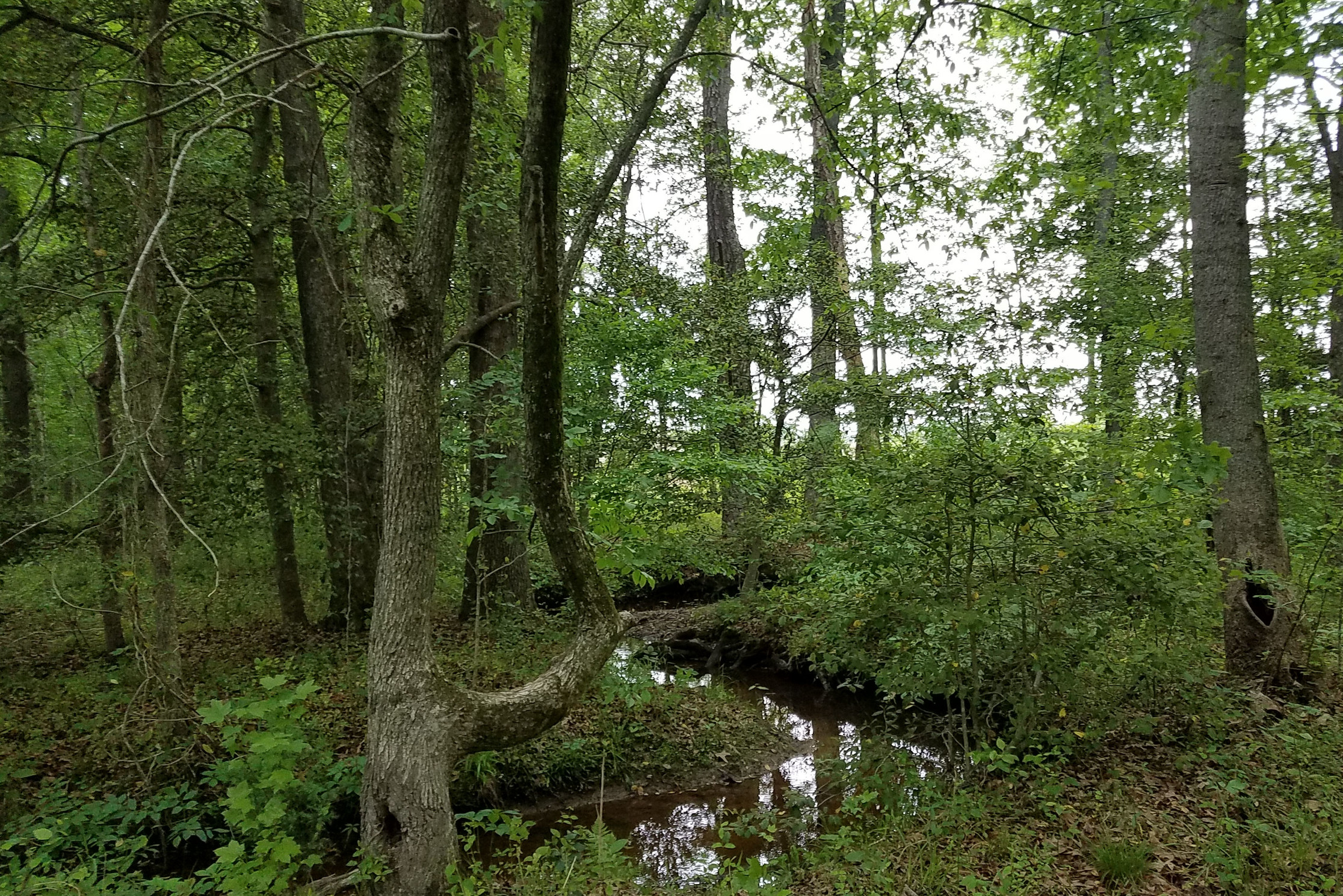 We started our Virginia Tree Farm Odyssey today. We will be visiting twenty-one certified tree farms in the Commonwealth over the next week as part of an assessment by the national American Tree Farm System. Virginia is representative of the southern states this year.

So far it seem to be okay. The assessor says that he likes what he sees and there have been no significant problems or violations.

I am proud of the work we do in Virginia forestry. Virginia DoF inspects all harvests, but does not lay a heavy hand on landowners. The assessor if from Washington State. We talked a little about the differences between Virginia and the West Coast. Suffice it to say that I am very glad to be in Virginia.

There are lots of ecological differences between our forests and those on the West Coast, but one reason why they have so many more problems with bugs and fires is because it is much harder there to practice good forestry. In Virginia, we can thin and we can burn much easier, because of more reasonable regulations and better local markets for small wood. This means we can anticipate and often avoid insect infestations and we can preemptively burn on our terms and avoid many disastrous forest threatening wildfires. Wildfires and insect infestations are both natural and caused by human action or lack of proper action.

Our tree farmers reported manageable problems. We must be grateful that in Virginia we enjoy a relatively benign environment. We have not had a big outbreak of southern pine beetle for sixteen years. Some of this is good luck, but our regular thinning is very helpful. Most of Virginia is low risk for fusiform rust, a fungal disease that harms loblolly, and improved seedlings have almost eradicated it. We have invasives like kudzu, multiflora rose and ailanthus, but these are not overwhelming. We don’t have many poison snakes, maybe a few cottonmouths and timber rattlers, but I have never seen any. Ticks are probably the most annoying menace.

Anyway, we finished up in Brunswick County today and will go up toward Blackstone tomorrow morning.

This entry was posted in Conservation & Environment, Virginia forestry. Bookmark the permalink.